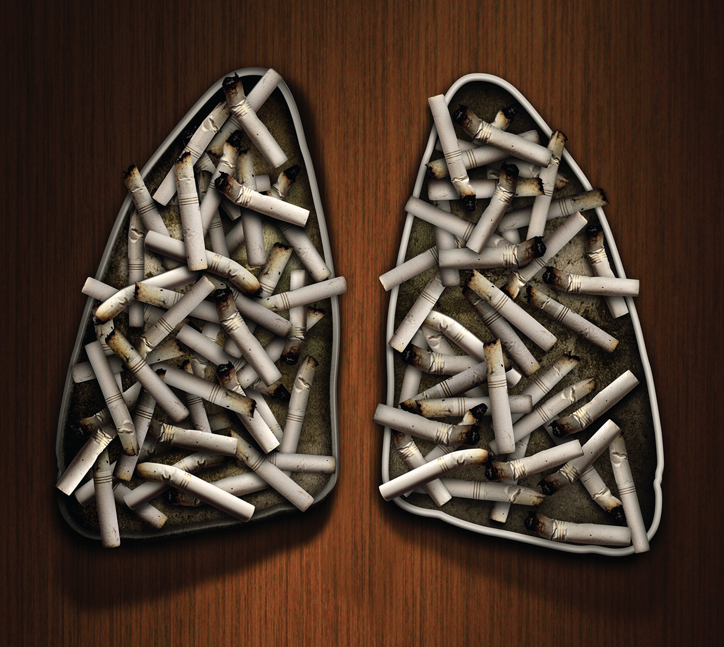 Smoking does not cause lung cancer. There, I said it.

I understand that is quite a controversial statement.

Is smoking good for you, no. Is it advisable, no. Is it a dirty habit, yes. Can it potentially weaken the lung tissue, predisposing an individual to the effects of a biological conflict shock, perhaps.

Yet, in the absence of the catalyzing shock experience, a lung biological program cannot initiate. This is the iron rule of cancer (The First Biological Law) of German New Medicine. Please read on.

Adenocarcinoma of the lung gives us a breathtaking round-earth perspective of the meaningful interplay of consciousness, brain and organ. We find the biological conflict centers around a death fright or a mortality fright, e.g. a cancer diagnosis that is perceived as a death sentence, i.e. one has been told they have six months to live.

From a biological perspective, a death fright is equated with being unable to breathe, GASP. Anyone who has ever received such news will recognize the GASP reflex. As the consciousness interprets the biological theme of the event, simultaneously the shock impacts a very specific relay switch within the brain, in this case, the brainstem.

The moment the brain receives that impact, the information is immediately communicated to the corresponding target organ, in this example – the lung, which is placed on emergency stand-by; a total preoccupation with the shock is reflected with the cold hands, insomnia and loss of appetite of the stress response – all mirroring the individuals attempt at resolving the news.

Automatically, the alveolar cells of the lung (air sacs) which regulate breathing, begin to proliferate forming what medicine calls a tumor.

Yet, upon a slight movement of the kaleidoscope, an intelligent survival program emerges – the significance of the additional cells (tumor) serves to increase the available alveolar surface area, lung capacity in order to extract more oxygen to assist the individual through the death fright conflict-shock, thereby optimizing the individuals chance of survival. You see, nature is not in fact flawed, fallible and diseased.

Contrary to the accepted perspective, this multiplication of lung cells is not a pointless process but rather serves a very definite biological purpose. The tumor growth will be in direct correlation to the intensity and duration of the shock. The cellular mitosis will continue until the conflict-shock is resolved, at that moment the consciousness releases the special program, as it is no longer needed – and the cells, as if on cue, stop replicating.

But we’re not done – now the repair crews come in for clean-up detail. The overgrowth of cells will be decomposed via TB mycobacteria and eliminated. If the microbes are absent, the nodules will be encased off as a harmless remnant of the biological program that has run its course.

Healing alveolar nodules used to be commonly diagnosed as lung TB. Today, they are more often diagnosed as lung cancer. If observed after the program has completed the individual would present with TB lung caverns.

The second type of lung cancer program is a bronchial carcinoma.

When we experience a territorial fear (males and or post menopausal females) or a nest fear (females) or aggression therein (it’s really about feeling safe) the bronchial lining will undergo an ulceration process where there is microscopic necrosis or cell loss.

This is a normal evolutionary response when experiencing higher brain conflicts – as the “relay switch” is located in the sensory cortex. The purpose of the ulceration process is too widen the bronchi in order to facilitate greater oxygen intake to assist the individual through the territorial fear.

It is only upon entering the healing phase (conflict resolved!) that we will express swelling within the bronchi and be diagnosed with a bronchial carcinoma – which is a healing phase or curative “tumor.”

It should also be noted that a bronchial carcinoma is not an actual tumor, but rather a very deep expression of the above swelling and occlusion.

When a motor component (e.g. feeling stuck relative to the territorial fear) is involved there will be coughing as well, in order to help expel the mucous. This is directed from the motor, not sensory cortex.

In 2004, my parents were going through a less than amicable divorce. It had gotten to the point where one of them was going to have to move out of the house – yet neither of them would budge. This territorial stalemate went on for number of months.

This territorial aggression was her dhs (conflict shock) – feeling aggressed towards or unsafe within her home, within her territory.

Ironically, it would have been impossible for my mom to have experienced a masculine territorial conflict even a few years earlier. One way a woman can experience a masculine conflict is if they are biologically no longer female, meaning postmenopausal, which my mom was.

That territorial stand-off was responsible for the bronchial program.

The third type of lung cancer program is a pleural carcinoma.

This is an emergency adaptation in response to a literal or figurative attack against the chest or thoracic cavity. During conflict activity we see cell augmentation as the body attempts to build up the pleura by developing a mass (a mesothelioma) which is designed to protect against further attack.

In 1999, The Beatle’s George Harrison had his home broken into in the middle of the night (a territorial aggression, fear.) He was stabbed in the chest and experienced a collapsed lung (an attack on the thorax.)  “There were times during the violent struggle that I truly believed I was dying,” (a death fright, fear of mortality) Harrison said in a statement read out to a packed Oxford Crown Court yesterday.

George Harrison died of “lung” cancer which was attributed smoking.

In both adeno, bronchial and pleural carcinomas a secondary conflict centered on “not being able to take in enough air” may initiate. This involves the goblet cells which naturally secrete mucous. The biological purpose is to better lubricate the airways to allow air to glide effortlessly in.

This blog is an educational only blog. The information and services contained herein should not be construed as a diagnosis, treatment, prescription or cure for disease.Those seeking treatment for a specific disease should consult with their physician in order to determine the proper, correct and accepted treatment protocol before using anything that is disclosed on this page. The above referenced material reflects Dr. Neal Smookler’s individually held sincere belief regarding German New Medicine. Members, of course may believe about GNM as they wish; they need not believe as Neal does to receive wonderful benefits. Please visit our Legal page for more information.