noun. a feeling of worry, nervousness, or unease, typically about an imminent event or something with an uncertain outcome.

The rainbow of all disorders.

Why is anxiety, in all it’s hues so prevalent? It’s really quite simple. Danger and powerlessness. Two very common biological conflicts.

In German New Medicine, emotional disorders such as anxiety involve multiple biological conflict-shocks in opposing halves of the brain, referred to as a constellation. In other words, one active conflict on each hemisphere in direct opposition. Think a constellation of stars in the night sky.

Anxiety is an expression of a frontal constellation involving danger (branchial arch relay) on one hemisphere and powerlessness (thyroid duct relay) on the other. The expression of danger might be heading into a dangerous or unknown situation, being confronted by danger. Powerlessness may take the form of helplessness or having no control.

When both hemispheres are active with conflict, the individual can no longer think clearly. I personally feel there are further unknown components going on that account for cognitive distortions et al.

The biological or meaningful purpose of the anxiety is to place the individual on high alert in order to remain vigilant should they be confronted by another similar situation involving danger or powerlessness. Anxiety is in essence, a protection mechanism. 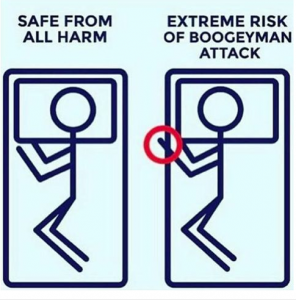 The beauty of having a session with a client experiencing anxiety is that we only need resolve or downgrade on side of the constellation for results.

The frontal area of the brain is accentuated with anxiety. When life adds an additional constellation that affects the occipital area – the manifestation slightly changes. Anxiety now becomes flavored with a form of paranoia. At times the new flavor simply feels like a more intense form of anxiety as it is difficult to distinguish the two commingling forces (anxiety coupled with paranoia) at play.

When we have two additional active conflicts opposite one another on both hemispheres affecting the visual cortex – some form of paranoia will now commingle with the anxiety.

Lucy, let me splain. As an example, when the left and right retinas are affected, which is a fear of someone from behind, paranoia will be evident.

Paranoia will also result when the left and right vitreous bodies are both affected – which is a fear from behind of someone or something. All better know as predator and or pest. There are multiple combinations at play – but you get the gist.

Last summer I was working with a young woman that had with severe anxiety most of her life. As we took a look at the picture of her life, she knew the anxiety started at about the age of eight. I asked her to go back and reflect what was going on in her life at the time / where she was living / where she was going to school / her family life / her neighborhood life etc.

She realized it was at that age that her neighbor snuck up on her, held a jackknife to her eye and threatened to poke her eye out if she did not say a bad swear word. Not wanting to lose her eye … she eventually swore. The aggression towards her was a biological shock of danger, while the powerlessness occurred at the same time as this individual was older and stronger – so she could not fight back.

Additionally, there was an additional twist involved. He told her if she ever told anyone about this, he would tell her parents that she swore and would get in trouble. To an eight-year-old this is a BIG deal. To an eight year old the thought of getting in trouble for swearing is worse than what her neighbor did.

She had no control. She would have to remain silent.

As she was walking back to her house he threatened her again saying that if she said anything he would come after her – this created one-half of an occipital constellation of predator/pest. In other words, someone’s after me, looking over your shoulder. Her paranoia only to start a few years later when she went into a full occipital constellation. Keep in mind that both opposing conflicts must be active at the same time to manifest symptoms.

The challenge with any German New Medicine session is to properly address these reminders that can delay a complete clearing.

These are subconscious triggers that will reopen the original biological program. At the moment of the conflict-shock, the psyche is wide open and processing billions of bits of information. What we need to understand is that at the time a person may have experienced a shock the psyche will actually record whatever stimuli were in the environment at that moment in time.

These stimuli need to be made conscious and processed back to the original conflict – otherwise a vicious cycle of chronicity ensues.

It’s sometime just a subtle feeling, a fleeting thought or nuance that releases the conflict and takes the individual out of constellation.