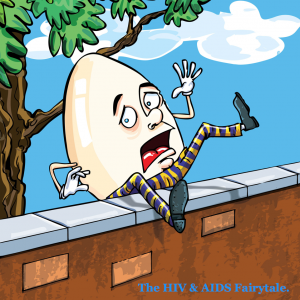 In the ‘How Much Is That Dogma In The Window?’ blog we took a long hard look at the very existence of viruses. Please review that blog first before reading this one.

When I was in my late twenties, just after graduating chiropractic school – I was run down and not feeling well. I thought I may have mononucleosis. When I went to my family physician for insight, he had informed me that my blood work came back and indicated …well, that was the issue, the results weren’t clear. He relayed to me that the Epstein Barr viral test came back with some weird spike on the immunoassay panel. I thought, what’s a weird spike? I mean, I either have Epstein Barr or not, right? Did they see the virus in my sample? Why is this so complicated? He explained that the immunochemistry techniques seemed to pick up the presence of the Epstein Barr virus but it was not definitive. When I inquired if we should repeat the test, he said no, we’ll just call it “chronic mono – how’s that sound?”

That whole experience was a mystery to me back then and left me with more questions than answers.

Most of us are unaware that viruses have NEVER been seen under an electron microscope (bacteria, fungus and parasites all have.

Most assume that when one gets tested for Epstein Barr, Herpes, HPV, HIV et al – that the specific laboratory is examining your blood under an electron microscope to determine if the virus is present. Not even close. What lab technicians are looking for, through a series of complex and indirect biochemical procedures – is the presence of antibodies to certain proteins, not antibodies to an actual virus.

Antibodies are believed to be an indication that the person has been exposed to certain “antigens” (ANY substance that induces an immune response.)

The laboratory protocols are so complex, inverted and circular, that the old adage of not being able to see the forest for the trees applies here in spades. The testing is always by indirect means. Why? Because as of 2017 science has not been able to isolate an actual virus from a host cell. In essence, what virologist are identifying are protein particulates and stretches of genetic material that are interpreted to be specific for a given virus and therefore concluded to be the virus!

So, HIV testing is not testing for an HIV antibody – rather for protein particulates and stretches of genetic material that are interpreted to be specific for the HIV virus and therefore concluded to be the HIV virus!

The sheer volume of theories surrounding HIV and AIDS is mind numbing, yet Gallo’s most controversial discovery was blindly embraced.

The brilliant research of Dr. Ryke Geerd Hamer has theorized that these protein particulates come into “expression” and therefore “identification” during certain biological conflict active and healing phases.

For example, the presence of HIV is a simple allergic response to a bodily substance known as smegma – a secretion found underneath the foreskin of the penis. During the conflict resolution (PCL-B) phase of this smegma biological conflict, these protein particulates associated with this allergic response will “express” and be “identified” during laboratory testing.

It must be isolated from a host cell.

It must be photographed and it’s diameter measured.

It must be biochemically characterized.

As of 2016 all three of the above have never been accomplished in humans.

So, the question then becomes – does HIV or any virus exist?

The testing protocols utilized today are quite flawed both in reliability, interpretation and standardization.

The commonly embraced ELIZA test is evaluating an allergic response, not a viral response.

The clinical definition of AIDS has been modified and ‘tweaked’ over the past three decades.

Today, if a patient has a low CD4 count and or other symptoms (even if the ELIZA test was negative) they are designated as HIV+!

Keep in mind, those labeled HIV positive will only decline into AIDS after the diagnosis – not from a compromised immune system from a killer virus but rather from new biological shocks relative the ‘horrible’ diagnosis.

There have been documented cases where pneumonia, thrush, herpes and kaposi sarcoma have been diagnosed along with a low CD4 and high CD8 count yet all patients tested negative for HIV.

So the question then becomes, if viruses do not exist – how does an HIV patient decline into AIDS?

With “AIDS defining illness”, if we look at the clinical picture (the individual biological conflicts) it all becomes clear.

Pneumocystis pneumonia is a healing phase in the lungs relating to fear of death, mortality – a death fright. Think how one would feel upon hearing the HIV diagnosis…”I’m going to die.” The lung conflict is accompanied by a kidney collecting tubule program which relates to our existence being threatened, in this case by an HIV diagnosis. Also, isolation, abandonment etc.

Swollen lymph nodes in the neck reflect the healing phase of heading into danger or powerlessness, helplessness (depending upon one’s laterality.) Given a life threatening diagnosis – feeling helpless would be understandable. Feeling like you’re heading into a dangerous situation would be obvious.

Night sweats are the healing phase involving TB bacteria (if present) that will accompany any old brain conflict (e.g. fear of death, mortality – a death fright) and or a conflict of existence, isolation or abandonment (all kidney collecting tubule conflicts.)

Diarrhea is the resolution of an indigestible anger, e.g. Why me?!

Unexplained weight loss will occur during the healing phase (once again) of any old brain conflict due to protein loss associated with TB bacteria.

The clinical presentation of AIDS are multiple biological conflict active and healing phases expressing themselves.

The problem here is that once someone has been diagnosed any and all symptoms they may experience are blamed on their HIV status. The fear, panic and misinterpretation of what is going on often sends the person down a slippery slope that they cannot recover from – the outcome of which is then … you guessed it, blamed on HIV.

So we can indeed have an initial immune response to a “foreign” protein particulate (NOT a virus) that has been introduced into our system through unprotected sex, blood transfer etc. I’ll repeat – this is an exposure to a “foreign” protein only that is not native to our system, not a virus. This is the classic “immune” reaction – swollen glands, fever etc. This is a natural and harmless occurence and will pass in several days.

If, down the road – should symptoms of AIDS present, from either our unique biological conflict history and or the diagnosis or treatment protocol, they will be conflict related and have absolutely no correlation to an HIV infection and this immune response. I know it’s confusing but I hope that makes sense.

Here is the latest on the Lanka Case.

The above referenced material reflects Dr. Neal Smookler’s individually held sincere belief regarding GNM. Association members, of course may believe about GNM as they wish; they need not believe as Neal does to receive wonderful benefits. This German New Medicine blog is an educational only blog. The information and services contained herein should not be construed as a diagnosis, treatment, prescription or cure for disease. Those seeking treatment for a specific disease should consult with their physician in order to determine the proper, correct and accepted treatment protocol before using anything that is disclosed on this page. Please visit our Legal page for more information.