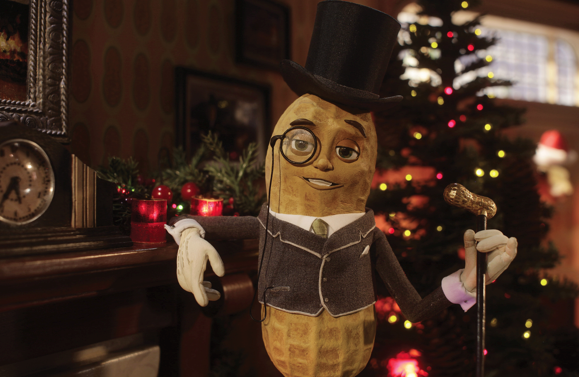 He was created in 1916, in the midst of WWI, by a fourteen year old boy; Antonio Gentile, the winner of a contest to create the new company logo for Planters. Gentile submitted a drawing of a peanut man along with an interesting name – Bartholomew Richard Fitzgerald-Smythe, aka, Mr. Peanut.

Did you see him recently on CNN’s Larry King Live? He’s a mess. His appearance was what could be only described as nutty. It was rumored he was drinking on air and what’s up with his faux, Howard Wolowitz, dickie-like-suit-vest. He’s clearly in some type of pain, existential or otherwise.

Planters Mr. Peanut enduring plantar fasciitis? Well, as we can see by the ever present cane, that’s more likely. Read on.

Plantar fasciitis is one of the most common causes of heel pain. It involves pain and inflammation of a thick band of tissue, called the plantar fascia, that runs across the bottom of your foot and connects your heel bone to your toes.

Plantar fasciitis commonly causes pain that usually occurs with your very first steps in the morning. Once your foot limbers up, the pain of plantar fasciitis normally decreases, but it may return after long periods of standing or after getting up from a seated position (mayoclinic.org)
In German New Medicine, Plantar fasciitis is the well known healing phase of a self devaluation conflict. If it is severe, we need to look to kidney collective tubules as well.

Question arise – am I good enough, can I do this, can I succeed. Am I, not as good, not as capable. Am I, worthless, damaged goods, inferior, deformed, ashamed, tainted, less than whole THERE.

Where’s THERE? … the plantar fascia tendon.

It’s all, about being unable.

During conflict activity we see microscopic cell loss within the tissue of the plantar fascia along with tissue weakening and eventually structural and function loss. Only during the healing phase do we see swelling, inflammation and pain. And, only in the healing phase is the actual biological meaning of the program revealed – as the area in questions is strengthened.

Bartholomew Richard Fitzgerald-Smythe, Mr. Peanut – most recognized for his 1986 Superbowl XX half-time show, had been out of the biz for quite some time. He has been auditioning to get back in the game, mostly television – commercials mainly.

He had been attempting for quite some time to get hired with CPN (Cable Peanut Network) as their steady spokespeanut, the position of which would include the skill of cane and tap dancing. After the audition, some nineteen months prior, he overheard one of the competitor peanuts, who had witnessed his audition state that he had two left feet (his self devaluation conflict.)

Mr. P. remained in conflict activity, unbeknownst to him, and only went into the bilateral healing phase when he got hired by ESPN (Entertainment and Sports Peanuts Network) as the latest spokespeanut for peanut allergy awareness.

Mr. P., although he understood the conflict – was having a difficult time completing the inflammatory healing phase due to tracks (a hanging healing.) Turns out, the rival peanut who had hurled the “two left feet” insult was now dating his daughter, little peanut. He was a constant reminder of the original conflict of self devaluation.

For the subconscious mind, past-present-and-future do not exist. Mr. P. would have to bring this awareness up from the subconscious, and remind himself that his soon to be son-in-law, today, no longer reflected the moment in time of his self devaluation.

This plantar fasciitis fantasy piece is a tongue-in-cheek parody, intended as fiction.