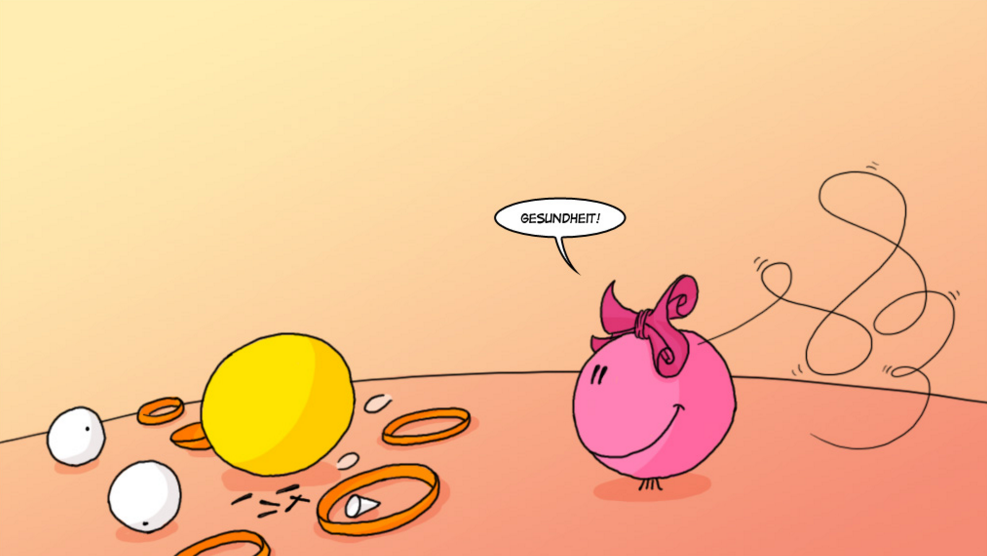 While similar to the equivalent of ‘bless you’ in English – I was told the exact meaning of gesundheit was closer to ‘good health to you’.

Whether it be gesundheit, prosit, salute, cok yasa, zay gezunt or bless you – the acknowledgement will most assuredly follow a sneeze.

Sneezing and seasonal allergies (any allergies really) – are all about subtle reminders (a kind of subconscious deja vu) of an earlier biological conflict that contribute to the response.

One of the most unique (and puzzling) aspects of allergies are the different and sundry ways that the exact same allergen seems to express itself from individual to individual.

This is the first clue that there may be a fly-in-the-allergen-ointment.

These recordings are imprinted and saved within the nervous system, until the conflict is resolved. The recordings or reminders that remain are referred to as tracks.

The stimuli that are recorded can serve to later send us back into conflict activity and or resolution.

As mentioned, the common allergic response is a nice example of a track.

If, at the moment of separation conflict (the resolution or healing phase of which is a common rash) we are eating strawberries (one bit, pun intended, of perhaps hundreds of bits that are recorded in this snap-shot-in-time) we may later in life demonstrate a rash after consuming strawberries. Why? The subconscious connects strawberries and separation. The strawberry literally places us back in the conflict cycle!

If, at the moment of stink conflict, perhaps an ongoing and drawn out home renovation (the resolution or healing phase of which is a sinus infection) we are enduring an extreme winter cold snap – we may later in life demonstrate a seasonal sinus infection every winter. Why? The subconscious connects the winter chill and the stink conflict. The cold snap literally places us back in the conflict cycle!

If, at the moment of danger or powerlessness conflict, affecting the thyroid duct and or the branchial arch relay in the frontal area of the brain (the initial resolution or healing phase of which is a migraine) we are drinking wine – we may later in life, experience a migraine after consuming wine. Why? The subconscious connects wine and danger, powerlessness. The wine literally places us back in the conflict cycle!

Interestingly enough, each migraine sufferer experiences different symptoms. Some have nausea, while others may experience visual “auras” – which are simply different biological conflicts that are part of the construct of the overall clinical picture. In other words, in addition to biological conflict of danger, powerlessness – at the moment of the biological conflict, an anger and visual component were also present.

In biological terms, these are all an allergic response and their purpose is clear – to serve as a heads-up, as the last time this particular track or trigger was in the snapshot, there was a high alert event as a conflict shock of separation, stink, powerless/danger was experienced!

Some tracks are dramatic while others are quite subtle – a fleeting thought, e.g. But whether dramatic or subtle, seen in this new light – an allergy or allergic response is a communication.

When an allergen track is present or presented to our nervous system – the subconscious is brought back to the moment in time of the original biological conflict. In other words, we go back into conflict activity. As soon as life’s events enable a resolution we immediately enter the healing phase of the conflict in question.

This is nature’s way of providing the organism another chance to completely resolve the original shock (isn’t nature wonderful!)

These are very basic examples of course, but they demonstrates the connection of an allergen (strawberry, mold, wine) to the original conflict (separation, stink, powerless/danger.)

The traditional interpretation of an allergic response is that when we are exposed to the offending allergen the body’s defenses suit up to fight. Blood tests such as RAST (radio-allergo-sorbent test) utilize immunoassay technology to detect specific IgE antibodies to determine the substance a subject is allergic to.

These immunoassay testing procedures have been discussed ad nauseum so I won’t revisit them here. Suffice it to say, their validity has been called into question.

Playing devil’s advocate – let’s assume the immunoassay testing is not in fact, flawed.

A question that one must be asked is why does the exact same allergen seem to express itself very differently from individual to individual?

For example, Alternaria is a common household mold that may express as sinusitis in one, asthma in another and cystic fibrosis in another.

Cladosporium is another common household mold that has been observed to cause infections of the skin in one while affecting the sinuses in another and the lungs in yet another.

Dr. Hamer‘s research helps us to understand the above, in other words – why the same allergen (mold) expresses in so many ways.

Celiac disease provides us a more in depth understanding of the allergen concept. Celiac in essence, is an allergic response to gluten. When one removes gluten from their diet, it is not the removal, avoidance of the bread, cookies that cures the Celiac disease – it is the removal of the track!!! (Yes, that gets three, count ’em … three exclamation points.)

Meaning we no longer get triggered back into go conflict activity and the inevitable healing phase – the expression of which is Celiac’s.

So, how do we inactivate this allergy response?

By unearthing the original biological conflict and understanding how the presence of the track, in whatever form, was a part of that snapshot-in-time, so it is released by the psyche and no longer triggers the response.

Unless these subconscious reminders are made conscious, the allergic response will perpetuate.

So, in practical application how successful are we with deactivating the tracks? Well, that all depends. If the allergy is ‘fresh’ it can be relatively simple to ascertain the original conflict and associated tracks. If the allergy has been longstanding for decades, we may have dozens upon dozens of tracks that have built up due to recurring relapse. When one track is experienced, all the other tracks get “called in” – presenting challenges. The individuals willingness to become mindful plays a vital role.

Not only are tracks established early on, at the moment of the biological conflict – they also (and often) ‘add-on’ and get ‘called in’ when a new experience becomes connected to an earlier track. I refer to these tracks as relational tracks. Looking at our strawberry/separation example. The earliest association (track) to the separation conflict is the strawberry. We now have an ‘allergy’ to strawberries. As we move through life, we perhaps enjoy a lovely picnic on a gorgeous but windy (ragweed) spring day. The salad unbeknownst to us has, you guessed it … strawberries. The ragweed is now ‘added-on’ to the strawberry track. Our subconscious now associates ragweed with the earlier separation conflict. Makes sense?

This blog is an educational only blog. The information and services contained herein should not be construed as a diagnosis, treatment, prescription or cure for disease. Those seeking treatment for a specific disease should consult with their physician in order to determine the proper, correct and accepted treatment protocol before using anything that is disclosed on this page. The above referenced material reflects Dr. Neal Smookler’s individually held sincere belief regarding GNM. Members, of course may believe about GNM as they wish; they need not believe as Neal does to receive wonderful benefits. Please visit our Legal page for more information.