How Much Is That Dogma In The Window? 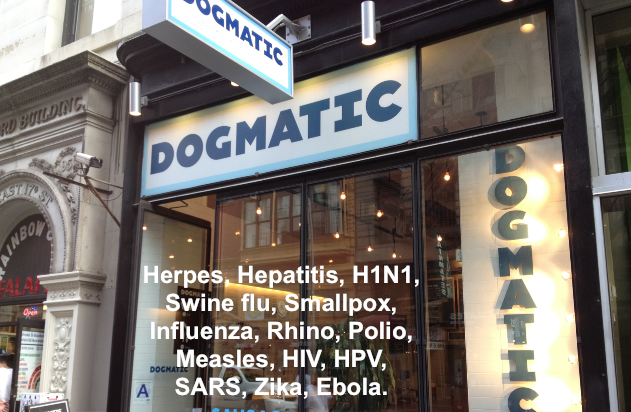 How Dogma coalesces out of the ethers is a multi-faceted question and one that is best not examined here.

I have to state that I am not a big conspiracy theorist, denialist or the like, yet when I began researching all of this I was shocked at what I discovered. I also do understand this to be a clearly controversial topic. You’ll have to decide for yourself what you choose or choose not to take away from this.

I’ll do my best to simplify what is a ridiculously complex topic – calling into question the very existence of viruses.

When I was in my late twenties, just after graduating chiropractic school – I was run down and not feeling well. I thought I may have mononucleosis. When I went to my family physician  for insight, he had informed me that my blood work came back and indicated …well, that was the issue, the results weren’t clear. He relayed to me that the Epstein Barr viral test came back with some weird spike on the immunoassay panel. I thought, what’s a weird spike? I mean, I either have Epstein Barr or not, right? Did they see the virus in my sample? Why is this so complicated? He explained that the immunochemistry techniques seemed to pick up the presence of the Epstein Barr virus but it was not definitive. When I inquired if we should repeat the test, he said no, we’ll just call it “chronic mono – how’s that sound?” That whole experience was a mystery to me back then and left me with more questions than answers.

Most of us are unaware that viruses have NEVER been seen under an electron microscope (bacteria, fungus and parasites all have.)

Most assume that when one gets tested for Epstein Barr, Herpes, HPV, HIV et al – that the specific laboratory is examining your blood under an electron microscope to determine if the virus is present. Not even close! What lab technicians are looking for, through a series of complex and indirect biochemical procedures – is the presence of antibodies to certain proteins, not antibodies to an actual virus.

Antibodies are believed to be an indication that the person has been exposed to certain “antigens” (any substance that induces an immune response.) This is only a working hypothesis.

The laboratory protocols are so complex, inverted and circular, that the old adage of not being able to see the forest for the trees applies here in spades. The testing is always by indirect means. Why? Because as of 2016 science has not been able to isolate an actual virus from a host cell. In essence, what virologist are identifying are protein particulates and stretches of genetic material that are interpreted to be specific for a given virus and therefore concluded to be the virus! These particulates have clearly been viewed but they are NOT the virus.

These protein particles are involved in intracellular and extracellular transport and are symbiotic in nature.

Dr. Hamer has theorized that these protein particulates come into “expression” and therefore “identification” during certain conflict active and healing phases.

For example, the presence of HIV is a simple allergic response to a bodily substance known as smegma – a secretion found underneath the foreskin of the penis. During the resolution phase (PCL-B) of this smegma biological conflict, these protein particulates associated with this allergic response will “express” and be “identified” during laboratory testing.

It must be isolated from a host cell. As of 2016 this has never been accomplished in humans.

It must be photographed and it’s diameter measured. As of 2016 this has never been accomplished in humans.

It must be biochemically characterized. As of 2016 this has never been accomplished in humans.

The black and white electron microscopy that are seen (Wikipedia) are once again NOT the actual virus. This photo taken from Wikipedia is supposed to be the polio virus – notice on the bottom, the term Virions – these are the particulates mentioned above generated by suction of an indifferent mass through a very fine filter into a vacuum. The actual polio virus has NEVER been isolated from a host cell, nor imaged, nor it’s diameter measured. The biochemical characterization of those “isolated” polio viruses has never been published anywhere nor has anybody even claimed to have accomplished such a characterization. 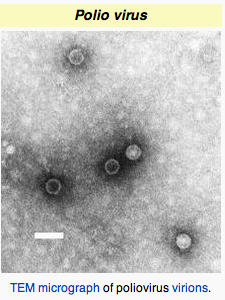 The below gallery of photographs and description are excerpted from Stefan Lanka… http://neue-medizin.com/lanka2.htm.

Many of the photos are colored indicating that they are the (art) work of designers, because electron microscopic photos always appear in black and white.

The images of HIV, Measles (Masern) and Smallpox (Pocken) viruses clearly show that these are just cells wherein the viruses can allegedly be found. No virus has been isolated. The photos actually show cells and typical endogenous particles in them.

In the case of the Influenza, Herpes, Vaccinia, Polio, Adeno and Ebola viruses each photo shows only a single particle; nobody claims that they’re isolated particles, let alone particles that have been isolated from humans. These particles are partially the cellular particles mentioned above and typical artifacts which means structures that accrue after inappropriate fixing and drying of the probes, while being prepared for the electron microscope.

The photo of the Hepatitis B “virus” does not show isolated structures, rather as the image title already says, an agglutinate. This is the scientific term for proteins from the blood that are clumped together, as is typical for coagulations. Typically, thereby round and also crystal structures accrue depending on the condition of the blood sample.

The Ultimate Conspiracy. The Biomedical Paradigm by James McCumiskey. This book serves as a wonderful introduction to the virus question, GNM and so much more.

.https://yourbodyisperfectintelligence.wordpress.com/?s=herpes.  The flaws of  the Viral Testing protocol presently being used.

So the question then becomes, if viruses do not exist – how do we become ill?

So let’s take a look at AIDS.

With AIDS, we simply need to break down the clinical picture by the individual biological conflicts and adaptive bodily response.

Pneumocystis pneumonia is an emergency adaptation response in the lungs relating to fear of death or mortality. Think how one would feel upon hearing the AIDS diagnosis…”I’m going to die.” The lung conflict is accompanied by a kidney collecting tubule program which relates to our existence being threatened, in this case by an AIDS diagnosis.

So we can have an initial immune response to a  “foreign” protein (NOT a virus) that has been introduced into our system through unprotected sex. This is the classic “immune” reaction – swollen glands, fever etc. This is a natural and harmless occurence and will pass in several days. If, down the road – should symptoms of AIDS present, from either our unique conflict history and or the diagnosis, they will be conflict related and have absolutely no correlation to this immune response. I know it’s confusing but I hope that makes sense.

The Zika “issue” had been around for quite some time. Never was anyone ever quarantined and rarely was anyone hospitalized for this dangerous “virus.” The seemingly random, out-of-nowhere explosion of microcephaly cases would point me in the direction of some type of environmental and or “bad batch” vaccination neurotoxin. I will not comment beyond that until more information  comes in but will state on the record it has zero to do with a mosquito born virus.  Zip. Zilch. Nada.

As for Ebola –
The Ebola issue seems to be a poisoning of the water supply, the reasons for which can only be conjectured. I’ll add more comments as time permits.

In 2011, Dr Stephan Lanka, a German virologist offered €100,000 to anyone that could prove the existence of the measles virus.

In 2015, a Dr. Barden claimed the € 100,000 with what the lower courts deemed adequate evidence. Dr. Lanka appealed this finding, leading to Bardens v. Lanka.

This is quite long but relates to the appeal in the Bardens v. Lanka case. In summary, Dr. Lanka won on appeal as it was determined that of the six scientific papers provided by Dr. Barden’s, none offered proof that the measles virus actually exists. Therefore Dr. Lanka did not have to pay the €100,000. You need to take advantage of Google translate to view it.

The Bardens vs. Lanka Case | Chronology and Documentation.

Here is the latest summary on the Lanka case (Aug. 2017) … http://healthimpactnews.com/2017/german-federal-supreme-court-upholds-biologists-claim-that-measles-virus-does-not-exist/

The judges in the legal case (Bardens vs Lanka) determined that none of the six scientific papers provided by Dr. Bardens offer proof that the measles virus actually exists. Thus Dr Lanka does not have to pay Dr Bardens the €100,000 in prize money, which represent a victory for Dr Lanka for justice. We are at the start of a new era in science and medicine.

The above referenced material reflects Dr. Neal Smookler’s individually held sincere belief regarding GNM. Association members, of course may believe about GNM as they wish; they need not believe as Neal does to receive wonderful benefits. This German New Medicine blog is an educational only blog. The information and services contained herein should not be construed as a diagnosis, treatment, prescription or cure for disease. Those seeking treatment for a specific disease should consult with their physician in order to determine the proper, correct and accepted treatment protocol before using anything that is disclosed on this page.  Please visit our Legal page for more information.