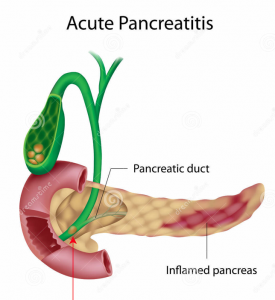 As a German New Medicine Practitioner when one experiences a territorial anger with respect to something that was stolen or being ripped off – they may experience that situation as a specific biological conflict associated with the pancreatic duct.

German New Medicine reveals that inflammation of the pancreatic duct commences when the above biological conflict initiates an emergency adaptation response designed to assist an individual during the conflict active phase.

In German New Medicine, the use of the term conflict is very different from that of its use in psychology. In German New Medicine, a biological conflict is a consciousness “Catch-22”. A trauma, shock, difficulty, dilemma or conundrum which the individual must overcome in order to insure it’s biological integrity or survival. The “Catch-22” lies in the reality that the biological conflict cannot, at least at that moment in time be resolved. A stalemate of sorts ensues, but like any good stalemate something has to give, so nature intercedes to take the ‘weight’ of the distress off of the psyche and shift it to the body, in this case, the pancreatic ducts.

The ‘weight’ is translated into a compensatory emergency biological program that expresses on the cellular level that the body is able to run or process over time. This is nature’s way of satisfying Abraham Maslows ‘need for self preservation as the translation from the consciousness to the body (pancreatic duct) buys time for the possibility of a conflict resolution.

In this particular situation, cell ulceration in the pancreatic duct that transports digestive secretions will occur. Mild to moderate pain may be evident.

The pancreas has the dual function of secreting hormones (insulin and glucagon) as well as secreting digestive juices.

The biological meaning is revealed during this time of conflict activity as the ulcerative widening of the pancreatic duct is to facilitate a better transportation of digestive secretions needed to breakdown the figurative ‘morsel’ that was removed, taken, stolen or ripped off.

Upon conflict resolution, the ulcerations heal and swelling occurs in the pancreatic ducts; pancreatitis.

If a Kidney Collecting Tubule Program (a biological conflict of existence) is running concurrently, severe pancreatic duct swelling may occur with an intense symptomatic presentation and may be misinterpreted as pancreatic cancer.

What standard medicine calls pancreatitis, is, upon a slight movement of the kaleidoscope a meaningful adaptive program created to assist us in resolving a difficult biological “Catch-22” of a morsel that was stolen or unfairly taken from us.

If and when the individual can resolve the conflict and address all tracks, everything will return to normal. Tracks are conscious and subconscious stimuli that will reopen the original biological conflict. At the moment of the biological conflict shock, the psyche is wide open and processing billions of bits of information. What we need to understand is that at the time a person may have experienced a shock the psyche will actually record whatever stimuli were in the environment when the shock occurred.